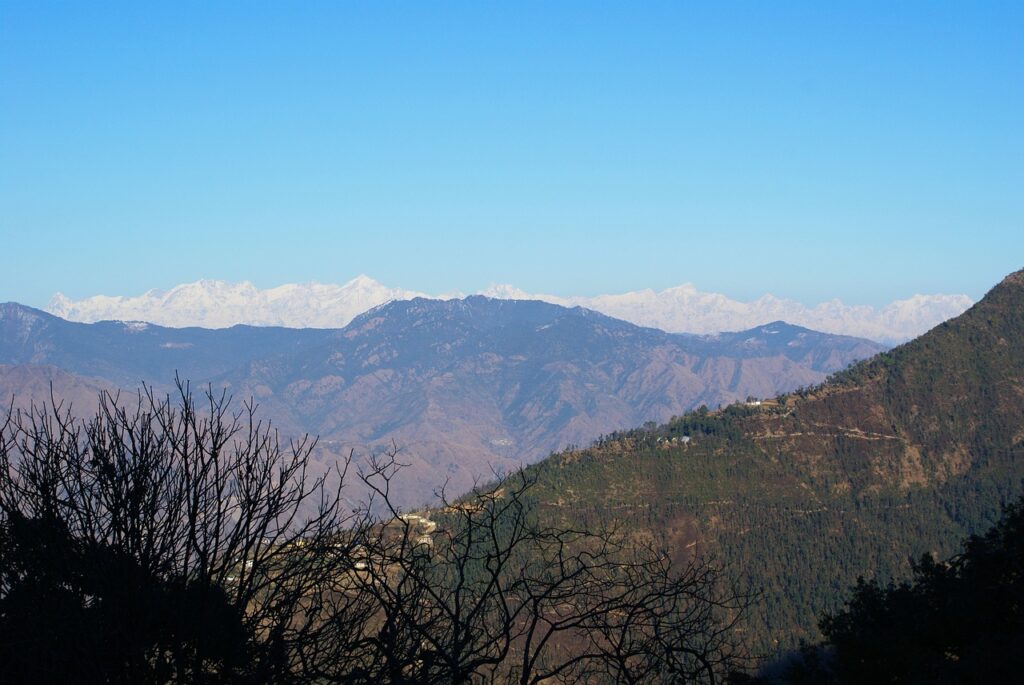 
Mussoorie, located some 250 miles north of Delhi, capital of India, is among the most popular hill stations of India, and is called the Queen among the hill stations. It overlooks the sprawling Doon valley and the city of Dehradun, the gateway to Mussoorie and infact to the entire Garhwal.Mussoorie, a hill resort at a height of around 7000 ft above the sea level, straddles a ridge in the Garhwal Himalayas – a region which is developing into a major tourism destination. The holy and mighty river Ganga is visible from one end of the ridge and another famous river Jamuna from the other, a stretch of around twelve miles in all,

from Cloud’s end in the west to Jabarkhet in the east.Although Mussoorie, as a hill station was established only as back as in 1823, it has quite an intriguing past. Mussoorie was never an official summer capital unlike Simla – a hill station in the state of Himachal pradesh which was the summer capital of the British Indian government and even unlike Nainital – the summer capital of the united provinces government in British India. Mussoorie always remained unofficial – for the affairs of heart. It has always been a gossipy place – with an air of informality and a tradition of romance – The Honeymoon capital of India.

Best Season:
The town is accessible all year round. For those who wish to avoid the cold, the best season is between April and June and again between September and November. Summer months will require light woollen clothing and winter- heavy woollen.

Gun Hill :
This is a pleasant 20-minute walk by a bridle path that forks of from Mall Road near Kutchery. A ropeway ride is also available to this second highest peak of Mussoorie. The distance by ropeway is only 400 meters. Gun hill offers a beautiful panoramic view of the Himalayan ranges namely Bunderpunch, Shrikanta, Pithwara and Gangotri group and a bird’s eye view of Mussoorie town and the Doon valley. Prior to Indian independence (1947), a gun mounted on this hill used to be fired at mid-day to enable the people to adjust their watches; hence its name.

Kempty Falls :
Buses or taxis can be taken to the waterfall, 15 km from Mussoorie on the Yamnotri Road at an altitude of 4500 feet. It has the distinction of being the largest and prettiest waterfall in the valley and is surrounded by high mountains. The stream flowing through a valley falls over a precipice and achieves its full intensity during the monsoons.

Camel’s Back Road:
The lovely promenade starts from Kulri Bazar near Rink Hall and ends at Library Bazaar making for a total distance of 3 kms. It is a popular road for walking or riding and is a grand spot from which to view the sunset. When viewed from near the Mussoorie Public School the spot resembles a camel’s back.

Nag Devta Temple
An ancient temple situated about 6 kms from Mussoorie. It provides a charming view of Doon Valley and Mussoorie

Your Dream Vacation is Here